From the Quays of the Old Port to Chinatown and from Little Italy to the Plateau Mont-Royal, Montrealers love to walk. In fact, this is their favourite way of exploring the city’s lively neighbourhoods, day and night. And getting around here is not only a breeze, it’s also fun.

From the downtown area, you can access the Montréal Underground Pedestrian Network, which is used by over 500,000 people daily. A bustling 30-kilometre network of walkways, featuring 1,700 shops, restaurants and an array of services, it connects to some 40 performance venues, theatres and cinemas, not to mention many hotels, attractions and museums.

By public transport or taxi

Hop on the metro and in just 10 minutes you’re at a museum, restaurant or in Old Montréal. Affordable and reliable, the metro can be accessed via the city’s Underground Pedestrian Network: two of the four main lines connect downtown to major tourism sites as well as to numerous bus stops and train stations.

If you prefer getting around by taxi, it’s easy to flag one down on the street. You’ll also find them at one of the city’s many taxi stands or in front of most major hotels. A trip to the airport from downtown will cost you a flat rate of $38—not including tip. Some taxis will also transport bicycles.

Montrealers are avid cyclists, and proud of it. In fact, ecologically-friendly Montréal is the first urban centre in the world to receive “Geotourism” accreditation from the National Geographic Society.

BIXI offers, at minimal cost, a bike-sharing service, 24 hours a day, 7 days a week, and three seasons a year (May to November). This service allows citizens and tourists to get a bike at one station, travel to their destination, and return the bike to a nearby station in the network. The BIXI system currently has 400 stations and 5,000 bikes. In addition, a network of 560 km of cycling paths winds through the city. 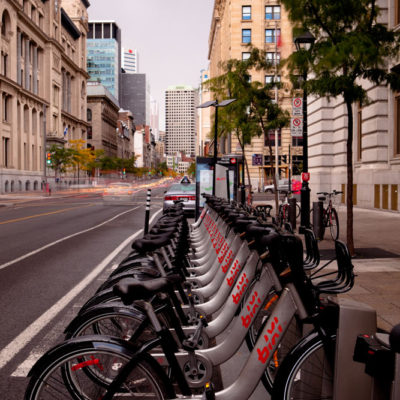