Located only 20 minutes from downtown, Montréal-Trudeau International Airport is one of the most important in Canada with direct flights from some 40 carriers to over 130 international destinations in Canada, the United States and abroad.

An array of information and services is available upon arrival, including several options for making your way to the heart of the city: car rental and limousine transportation companies are on site as well as airport shuttles, like the 747 Express bus. Featuring 24-hour service, 7 days a week, 365-days a year, the 747 Express bus costs only $7. The route features nine downtown stops conveniently located near major hotels and takes approximately 25 – 30 minutes each way, depending on traffic. If you are going by taxi, a trip downtown will cost you a flat rate of $38, tip not included.

Before leaving, make sure you have a valid passport and visa (if needed). Click here for more information.

By train or bus

VIA Rail Canada serves more than 450 Canadian cities. If you are coming from the United States, hop aboard an Amtrak train, with daily departures from several American cities to downtown Montréal. Visitors pull into Montréal’s Central Station, which is conveniently linked to the Underground Pedestrian Network and the Bonaventure metro station.

If you are planning a trip by bus, many American and Canadian operators come to Montréal, including Orléans Express. You will arrive directly downtown at the Montréal Bus Central Station, which is also connected to the Underground Pedestrian Network via the Berri-UQAM metro station.

If you are travelling by car from elsewhere in Canada or the United States, Montréal can be easily accessed by highway. The island of Montréal is only 75 kilometres (46 miles) from the US border, and many roads and expressways lead to the city, including the Trans-Canada Highway. Depending on your point of origin, you may take one of the major bridges—Champlain, Jacques-Cartier or Victoria, or the Louis-Hippolyte Lafontaine bridge tunnel—to head downtown.

For details on driving in Montréal, including information about driver’s licenses, right turns, road signs and parking, click here. 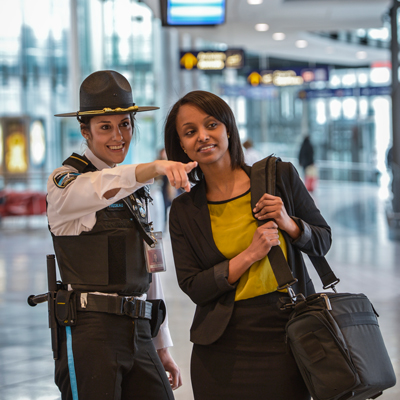